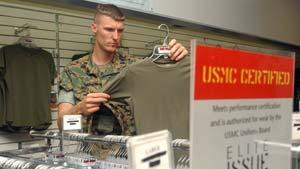 Marine Undershirts Get An Upgrade

With temperatures reaching upwards of 110 degrees Fahrenheit in Iraq during the summer months, the Marines serving there do everything they can to prevent

With temperatures reaching upwards of 110 degrees Fahrenheit in Iraq during the summer months, the Marines serving there do everything they can to prevent dehydration and heat exhaustion. Taking this into consideration, the Marine Corps decided it was time for the standard olive drab cotton undershirt to receive an upgrade.

The Marine Corps needed a performance t-shirt which kept the body cool, dry and unrestricted. And, according to the Berry Amendment, the shirt had to be manufactured in the United States. That’s when, about seven months ago, Carol Hochman, the president and chief executive officer for Danskin, Inc., got a phone call.

What evolved after months of rigorous testing and certification was Elite Issue; the undershirt with anti-microbial, anti-odor and anti-moisture technology.

“Before Elite Issue, the only males who wore Danskin products were wearing them under a Mickey Mouse or Goofy suit at Disney World; it helped to keep the guys inside from overheating,” said Hochman.

Founded as a small, family owned business catering to New York dancers, Danskin has been making quality fitness, yoga and dancewear for women and girls since 1882.

Lance Cpl. Justin W. Brown, a fire direction control man with 1st Battalion, 10th Marine Regiment, 2nd Marine Division, was attached to the 24th Marine Expeditionary Unit during his seven-month tour in Iraq. Because Elite Issue wasn’t available for purchase at the time, Brown, like many other Marines, went out in town and purchased Under Armour shirts.

“It was a total 180 degree turnaround,” said Brown. “The shirts were more breathable and kept me much cooler than the regular ones.” 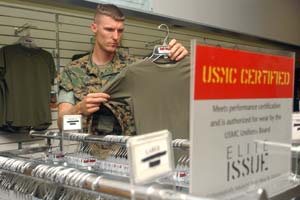 Like the Under Armour shirts, Elite Issue features anti-moisture or wicking technology. The moisture transport system moves perspiration and moisture away from your body to the surface of the garment for quick evaporation. This quick drying element aids in the regulation of body temperature for greater comfort and enhanced physical endurance in hot temperatures.

Two of the features exclusive to Elite Issue, according to Hochman, are the anti-microbial and anti-odor technology. The anti-microbial treatment meets military standards in inhibiting bacterial growth on garments and reducing resulting odors.

At this time, however, Under Armour shirts are not USMC certified and do not meet performance certification and dress code compliance. According to MARADMIN 199/04, Marines may wear undershirts of any material as long as the shirt has a Marine Corps approval identification number. Under Armour shirts currently have no such number.

“Here, the shirts were checked for both visual quality and accurate size measurements,” said Johnston. “The samples were then sent to another lab in Natick, Mass. where a machine, based on a pass/fail system, determined if the shirts were the proper shade of olive green.”

The certification will last three years. After that time, the shirts will need to go through a re-certification process.

Lieutenant Col. Gerry B. Guerrero, who just recently returned from Iraq, also saw many of his fellow Marines wearing Under Armour while on deployment.

“I saw it for sale in the exchange, but it was always around $25 per shirt,” said Guerrero. “The low price of Elite Issue was what initially caught my eye.”

After trying it on, Guerrero said the Elite Issue shirt felt lighter and more comfortable than those made with cotton.

Elite Issue shirts, both male and female, currently retail for $12.75 per shirt and should be available at all Marine Corps Exchanges.