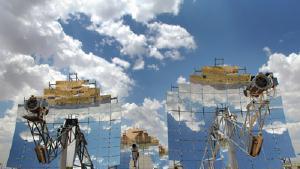 A massive, 4,500 acre solar generating station may soon be built 70 miles northeast of Los Angeles in Southern California. When completed, the proposed

A massive, 4,500 acre solar generating station may soon be built 70 miles northeast of Los Angeles in Southern California. When completed, the proposed power station would be the world’s largest solar facility, capable of producing more electricity than all other U.S. solar projects combined.

Southern California Edison (SCE), the nation’s leading purchaser of renewable energy, and Stirling Energy Systems today signed a 20 year power purchase agreement for the electricity to be generated by the facility. The agreement is subject to California Public Utilities Commission approval. 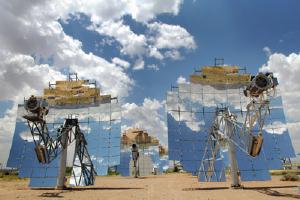 Plans call for development of a 500 megawatt (MW) solar project using innovative Stirling dish technology. The agreement includes an option to expand the project to 850 MW. One MW is roughly enough electricity to power 400 typical homes.

Initially, Stirling would build a one MW test facility using 40 of the company’s 37 foot diameter dish assemblies. Subsequently, a 20,000 dish array would be constructed near Victorville, California, during a four year period.

“At a time of rising fossil-fuel costs and increased concern about greenhouse-gas emissions, the Stirling project would provide enough clean power to serve 278,000 homes for an entire year,” said SCE Chairman John Bryson.

“Edison is committed to facilitating development of new, environmentally sensitive, renewable energy technologies to meet the growing demand for electricity here and throughout the U.S,” he said.

Although Stirling dish technology has been successfully tested for 20 years, the SCE-Stirling project represents its first major application in the commercial electricity generation field.

“We are especially pleased about the financial benefits of this agreement for our customers and the state,” said Alan Fohrer, SCE chief executive officer. “The contract requires no state subsidy and provides favorable pricing for ratepayers because tests have shown the Stirling dish technology can produce electricity at significantly lower costs than other solar technologies.”

The Stirling dish technology converts thermal energy to electricity by using a mirror array to focus the Sun’s rays on the receiver end of a Stirling engine. The internal side of the receiver then heats hydrogen gas which expands.

The pressure created by the expanding gas drives a piston, crank shaft, and drive shaft assembly much like those found in internal combustion engines but without igniting the gas. The drive shaft turns a small electricity generator. The entire energy conversion process takes place within a canister the size of an oil barrel. The process requires no water and the engine is free of emissions.

Tests conducted by SCE and the Sandia National Laboratories have shown that the Stirling dish technology is almost twice as efficient as other solar technologies such asparabolic troughs which use the sun’s heat to create steam that drives turbines similar to those found in conventional power plants, and photovoltaic cells which convert sunlight directly into electricity by means of semiconducting materials like those found in computer chips.

An Edison International company, Southern California Edison is one of the nation’s largest electric utilities, serving a population of more than 13 million via 4.6 million customer accounts in a 50,000-square-mile service area within central, coastal and Southern California.
Provided by the Environmental News Service.