Bid protests might be inevitable, but being prepared can defuse problems Why do vendors protest a bid award? According to Robin Rickard, CPPO, Chief Procurement

Bid protests might be inevitable, but being prepared can defuse problems

Why do vendors protest a bid award? According to Robin Rickard, CPPO, Chief Procurement Officer (CPO) for the Secretary of State of Oregon, and former CPO for the Oregon Department of Transportation, vendors protest because they can. Most state and local entities, Rickard explains, subscribe to the suggested statutory provisions in the Model Procurement Code (MPC) for State and Local Governments, first published in February 1979, and revised in April 1986, by the American Bar Association. “MPC is a fairly solid foundational process,” he says.

Model Procurement Code
Under MPC Article 9-101, any actual or prospective bidder or contractor can protest the solicitation specifications, contract provisions, or the intent to award a contract in writing, within 14 days, to the entity’s CPO or procurement officials; appeal a protest decision in the state courts; and have the decision reviewed by a Procurement Appeals Board.

MPC, Rickard explains, gives the CPO the authority to settle and resolve the protest prior to any court action and issue his or her decision in writing, stating the reasons for the action taken and informing the protestant of the right to judicial review or appeal to the Procurement Appeals Board. If the protest decision is appealed, the entity cannot proceed with the solicitation or award the contract unless the CPO states in writing that immediate award of the contract, despite the protest, is necessary to protect the substantial interests of the government entity. If the bid protest is upheld, and the protesting bidder should have been awarded the contract but is not, the aggrieved bidder can be compensated for the reasonable costs connected to preparing the bid that was wrongfully denied and other related costs, except attorney’s fees.

Protests Prove Procurement Integrity
Rickard says bid protests must be allowed because the public needs to have confidence in the fairness of procedures involved in soliciting and awarding contracts. Most often protests address the requirements, terms, and conditions of solicitation; the evaluation process; the technical ability of the evaluators; or suggest that the solution selected will not function or the winning proposer had an unfair advantage.

However, problems arise when vendors distort the spirit of the process and file protests to maintain their own competitive edge, get another chance to rebid, or gain information for the next bid, all because they have nothing to lose. Nuisance protests also can be expensive for the entity by delaying implementation of projects and by creating strained vendor/entity relations. 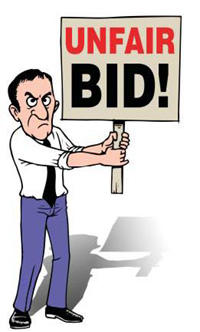 Protests of solicitation specifications should be filed 14 calendar days prior to bid closing, according to MPC guidelines. Requests for change or protest must include the reasons for the protest and any proposed changes to the specifications or provisions. The entity is not required to consider such requests received after a pre-established deadline. At this point, the CPO decides whether to uphold the bid specifications and reject the protest; amend the specifications and issue an addendum to the bid; or withdraw the intent to award, cancel the original solicitation, and start the bidding process over.

The entity must provide written notice to all bidders of its intent to award the contract, which becomes final 14 days after the date of the notice. If a bidder files a timely protest to the intent to award, the entity must respond to the protest in writing before it can issue the purchase order or contract. If the entity denies the protest and affirms the award in a written response, it can then award the contract.

Bid protests must be submitted in writing before the protest deadline and include the name and address of the protester and other contact information; identify the procurement and contract number if the contract already has been awarded; state the reasons for the protest; suggest any solutions that would resolve the protest; and submit supporting documents that substantiate the claim.

Debriefing Can Help
Often entities hold an informal debriefing for vendors before the intent to award is announced. The debriefing process, which according to Rickard is a formal process in the State of Delaware, explains to bidders what was originally specified in the solicitation, how the vendors responded, and describes the individual vendors’ strengths and weaknesses so they can understand how they scored against the winner. “[Debriefing] really is an excellent way of defusing angst on the part of the vendor,” Rickard explains, “because invariably if they are presented with a factual determination of why their proposal didn’t score as high as the winning proposal, they at least will, in 90 percent of the time, walk away and not file a formal protest.”

A debriefing process also saves time in the long run, Rickard says. “I can spend two hours with a disgruntled vendor debriefing on the solicitation and I don’t have to spend two weeks or two months going through a formal administrative process or a judicial process.”

What to Do
You receive a written bid protest. What do you do now? Rickard suggests this plan of action:

What Happens Next
In the State of Oregon, says Rickard, the director of the entity can decide to deny or sustain a bid protest. For the aggrieved vendor this is the last administrative review of the protest. The vendor’s next step would be to seek judicial review in state court. Other states and the MPC allow an appeal to a Procurement Appeals Board to consider the merits of the protest. But the protestant still may seek judicial relief at the circuit court level.

Courts are reluctant to determine settlements, Rickard says. If a court upholds the validity of a vendor’s protest, most likely it will return the protest to the agency to resolve with appropriate action. Rickard estimates that 90 percent of purchasing decisions are vindicated and the original awards stand.

In an unofficial poll of public agencies titled “Your Most Critical Challenge,” conducted by the NIGP in May 2003 and published on the NIGP Web site (www.nigp.org), respondents ranked bid protests as the lowest impacting business challenge, tied with reduction in wages, at 1.8 percent importance. But despite these perceptions, CPOs faced with a bid protest must learn to defuse the situation promptly, review the facts according to the law, and render a timely decision.

Editor’s note: Rob Rickard, CPPO, is the Chief Procurement Officer for the Secretary of State of Oregon. He also has served as CPO for the Oregon Department of Transportation. Since 1999 he has presented talks on procurement code in the U.S. and Canada. Also, he is a certified trainer for the National Institute of Governmental Purchasing (NIGP).