First Responders Signal for Safety Dollars Red Alert Although the need for hometown security has reached an all-time high, cities have yet to receive

Although the need for hometown security has reached an all-time high, cities have yet to receive sufficient funds for public-safety equipment 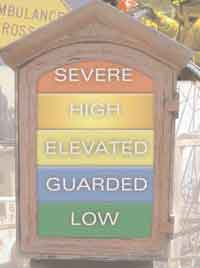 Following the terrorist attacks to our nation on September 11, 2001, many realizations came to light. Besides demonstrating U.S. vulnerability to terrorist attacks on American soil, the events showed the bravery of public-safety forces, as well as the lack of specialized equipment to detect and combat terrorist actions.

Since 9/11, government agencies at all levels have been scrambling to formulate and fine-tune disaster preparedness plans and equip government workers with the necessary supplies and training to counter terrorism. Now that U.S. military forces are engaged overseas in Operation Iraqi Freedom, the chance of terrorist attacks in our homeland is an even greater threat.

“The Iraq war will be fought on two fronts: one in the Middle East by our armed forces; and the other here at home by firefighters and other first responders,” said Harold A. Schaitberger, General President of the International Association of Fire Fight-ers (IAFF), in a March 11, 2003 letter to President George W. Bush and senior-level officials.

Schaitberger continues: “The federal government has taken the necessary steps to properly train, equip, and staff our military forces for action in Iraq, but it has failed to provide the same level of support to our first responders across the nation.” Based in Washington, DC, the IAFF represents 260,000 union firefighters and paramedics, who protect 80 percent of the U.S. population.

Money Matters
A main shortcoming in sufficiently equipping first responders is attributed to the lack of federal funding for local home-land-security programs. Since 9/11, only a handful of states have received federal funds, targeted at areas such as improving public-health programs, state and local firefighting, and law-enforcement readiness to combat weapons of mass destruction.

Other than various grants and relatively small distributions, the only significant amount of federal funding was awarded to states last September. As part of a supple-mental appropriation, $100 million was distributed among states to develop a comprehensive plan for dealing with terrorism within their cities and regions.

“Ordinarily, we [the National League of Cities] would support money going directly to cities,” says Cameron Whitman, Director of Policy and Federal Relations at the National League of Cities (NLC). “Because there’s got to be somebody coordinating a comprehensive plan within each state, we have agreed to have the money go through the states, with 75 percent of the money passed down to cities and regions within 45 days.” Headquartered in Washington, DC, the NLC represents more than 18,000 municipal governments, which collectively serve 225 million people.

Whitman adds that if the statewide distribution plan encounters problems, Governor Tom Ridge, Secretary of Homeland Security, has agreed to reevaluate the procedure. The amount each state receives depends on various factors, such as a state’s population, proximity to U.S. borders, or presence of nuclear power plants.

According to the NLC and U.S. Conference of Mayors, cities alone have yet to be reimbursed for at least $3 billion in incurred homeland-security expenses. The added cost has strained many municipal budgets, as well as hampered the ability to provide routine services.

In a recent survey conducted by the NLC, more than half of large cities (over 100,000 in population) reported that providing homeland security has made it more difficult to perform normal public-safety duties. Of the 221 cities surveyed, 80 percent of all cities and 62 percent of larger cities reported that they had not received any financial assistance for homeland security from their respective state.

“Because of the current fiscal crisis, and the fact that states are withdrawing their aid to cities, we’re having to lay-off police and fire-fighters,” Whitman points out. She adds that overtime costs for public-safety workers, required to maintain added security levels, have particularly drained city coffers.

Whitman believes that the federal government has an obligation to fund local public-safety programs because homeland security is a national defense issue. She notes that state and local governments cannot continue to supply the level of expertise and capacity needed for homeland security without receiving adequate funds.

Whitman also comments that the color coded advisory system, established by the Department of Homeland Security, explains federal-government procedures, yet provides no guidelines to cities and states. “The advisories provide no guidance or information to states and localities about what they should be expected to do because [federal officials] were afraid that they’d be accused of mandating certain actions, without supplying the necessary funding.”

Although President George W. Bush recently included $2 billion in a supplemental request to enhance state and local terrorism preparedness, $9 billion was requested by a unified voice of state-and local-government associations, such as the NLC, National Association of Counties, and National Conference of State Legislatures.

Furthermore, state and local agencies report that recent federal appropriations do not provide full funding for President Bush’s $3.5 billion First Responder Initiative. Instead, only about $1 billion is new funding for homeland security, with the remainder already earmarked for pre-existing programs.

Why haven’t cities and first responders received adequate funding for homeland security? The main reason is attributed to political bickering between the Bush Administration and House Appropriations Committee.

“At this point, we don’t care who is to blame for under-funding homeland-security money for first responders, and we don’t think the American people do either,” the IAFF’s Schaitberger states. “All we want is to secure the necessary funding before it is too late.”

“The reason why so many firefighters died in the World Trade Center attacks is that police and fire departments traditionally have avoided being able to talk to each other and bought different equipment,” Whitman says. “The reason why those firefighters didn’t come down out of the Trade Center was because the police were telling them, on their radio frequency and with their equipment, that the buildings were going to fall, and the firefighters couldn’t hear that.”

George Burke, IAFF Assistant to the General President, explains that multiple issues are involved with communications. “One issue is that many fire departments don’t have adequate communications, even among themselves. Sometimes, it’s just a question of whether the technology is appropriate. Other times, it’s the city’s [installation] of the radio system. The system might be designed for total coverage, but the city backs off to save money, and it doesn’t put up all the repeaters and antennas that are needed.”

Whitman adds that the problem is compounded because not enough radio spectrum is allocated for public-safety transmissions. To help supply needed spectrum, the Homeland and Emergency Response Operations (H.E.R.O.) Act is in the process of requiring television stations using channels 60 to 69 to relinquish those channels by December 31, 2006.

The NLC estimates that the cost of deploying interoperable communications equipment will range between $18 billion to $54 billion nationwide.

Other Protective Measures
According to the IAFF’s Burke, first-responder readiness hinges on three factors: “There’s specialized training, there’s specialized equipment, and there’s assuring that a fire department has adequate staffing. Two-thirds of our nation’s fire departments are under-staffed, meaning they have less than four firefighters on a piece of apparatus.”

As for equipment, “I dare say that there isn’t a fire department in this country that has the appropriate equipment to handle a chemical, biological, radioactive, or nuclear (CBRN) event,” Burke states. “Ultimately, every self-contained breathing apparatus (SCBA) in this nation needs to be replaced. We pushed for it, and the federal government recently passed a new standard that will make the self-contained breathing apparatus withstand CBRN agents. The current SCBA, not that there’s anything wrong with it, but it was designed to a standard for use in fires.”

In addition, “the protective clothing that firefighters wear is designed to withstand heat—it’s designed for fighting fires,” Burke explains. “It’s not designed for CBRN weapons of mass destruction (WMD).”

$65 million to train every professional firefighter to first-responder level for CBRN and WMD threats;

$42 million to upgrade or replace SCBAs to meet federal standards for CBRN protection;

$5 to 10 million to conduct re-search into developing firefighter protective clothing and equipment for use in all environments—from fire to CBRN incidents.

Call to Arms
To help secure needed funds for first responders to conquer terrorist threats, the NLC, IAFF, and other organizations are consistently lobbying on Capitol Hill and appealing to President Bush.

Another way to arm first responders is through information. The NLC, for example, has a comprehensive database with information regarding homeland security and other issues. Any NLC member can access this database to find out what other cities are doing.

“When you’re operating without any additional funding, obviously you can learn from each other on how you make due, and how you expand your capacity,” the NLC’s Whitman states.

Despite the absence of sufficient funding, today’s first responders stand ready to lay their lives on the line to protect citizens and our nation.

“The terrorists grossly underestimated us,” said Governor Ridge at a recent IAFF legislative conference. “We are tougher, smarter, and more courageous than they think. We will remain united, and we will persevere until we achieve victory”